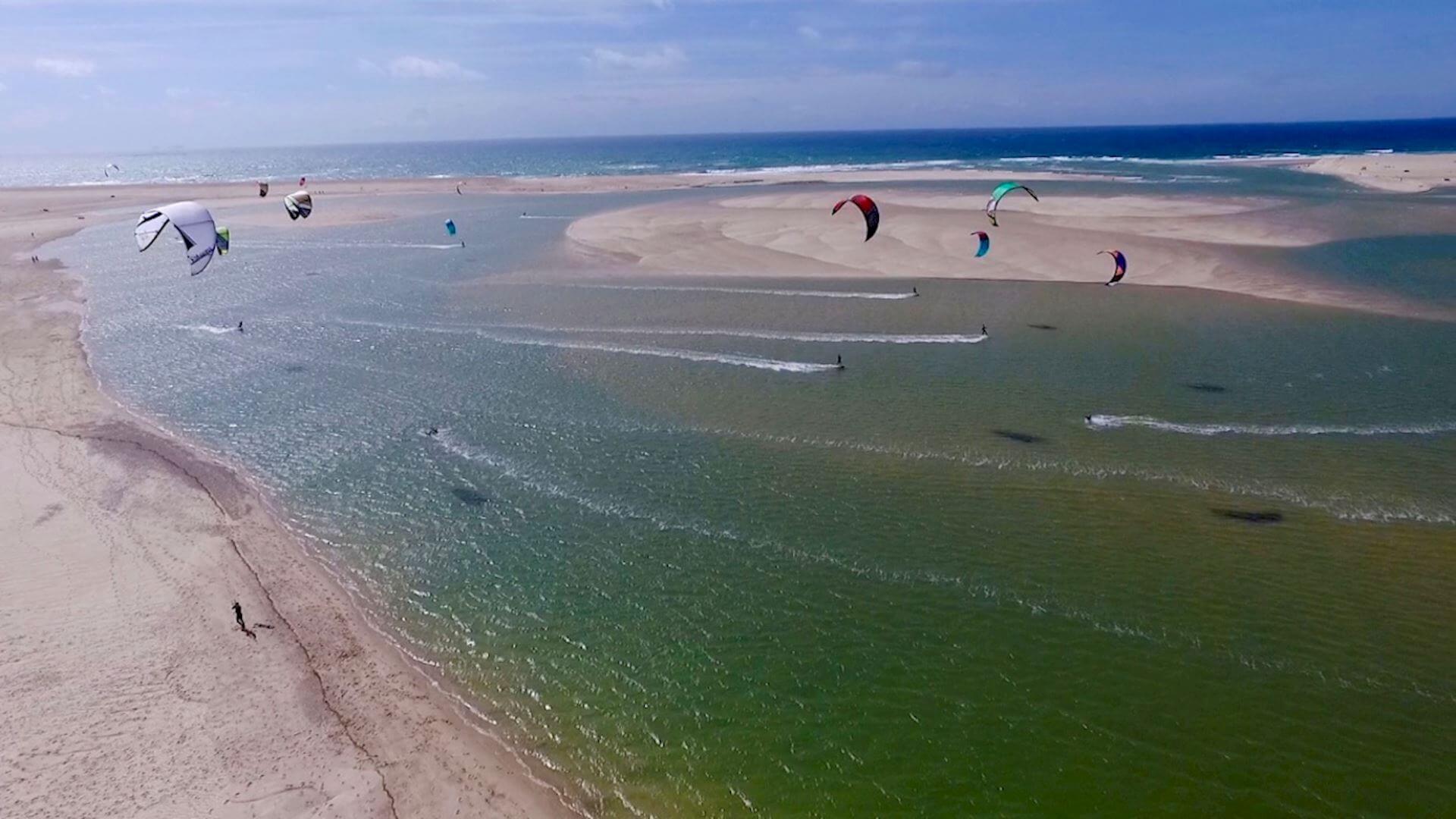 The Complete Guide to Kitesurfing in Portugal

With a long stretch of coastline that faces both the Atlantic Ocean and the Mediterranean Sea, Portugal is known best for its world class waves that are legendary in the surfing community; add that to the strong seasonal wind, and you can bet your buoyancy vest that Portugal is a kite destination that should be on your radar.

But wait; back up a second and tear your mind away from the water (just for a second- promise!).

What else can you expect from a visit to Portugal?

For one, it’s a seriously easy country to navigate your way around thanks to the top notch infrastructure and generally awesome level of English among the locals. It’s in the euro-zone too, which is a handy one for other European kite travelers- and on top of that, it’s a relatively inexpensive place when you factor in costs like food and accommodation.

Culturally, Portugal ticks all the boxes: the architecture is fabulous, the towns are colourful, the streets are full of interesting things to look at, and the food is as good as it gets.

Best time to kitesurf in Portugal: May to October

Wetsuit recommendation: During the warm summer months, a shorty will be more than enough to keep you comfortable. Throughout the rest of the year, a full length wetsuit is recommended.

Wind type: Thermal, Nortada, best when it blows from the North/Northwest

Water conditions: mainly waves, but you can find flat water spots and lagoons too.

Top tips for beginners: Many of Portugal’s renowned kite spots have big waves and strong swell, which isn’t ideal if you’re just getting to grips with your basic riding skills. Keep and eye out for places with flat water lagoons and wide sandy beaches such as Lagos and Faro, located down in the Algarve region.

In addition, it pays to know that the waves are usually much stronger in the winter time than in the summer. During the summer season, many of the spots (for example, Costa Caparica) have much more easy going conditions than that of the winter.

Just a 30 minute train ride from Lisbon, Guincho kite beach has some of the most reliable wind in all of Portugal (the northerly mountains tend to increase the force of the thermal winds that blow here).

This isn’t a spot for the faint of heart; waves at Guincho beach are well over a meter to a meter and a half- getting even bigger during periods of strong swell. That said, if you’re into your surfboard riding then this is the place to kite in Portugal.

The flat sand bottom creates a beautiful break separated by clean areas to play around in in between the waves. Just take note of the big rocks on either side of the beach; these are the only real obstacles that need to be avoided.

Famed for its strong swell and big waves, Praia do Baleal isn’t one for beginners. However, intermediate and advanced kiters are sure to dig the awesome surf and spacious sandy beaches.

The wider area of Peniche is a fantastic place to join a kite camp, kite tour, or even to plan a solo road trip thanks to the abundance of kiteable spots dotted within a half hour’s radius.

This is Portugal’s largest flat water lagoon- perfect for beginners, freeriders, and wakestyle kiters. Connected to the ocean via an estuary, the lagoon is affected by the tides- and during low tide it can become very shallow near the sandbars (so it’s best to head here during high tide). The best place to launch is on the Foz do Arelho side, where there’s plenty of space and a number of schools and facilities. 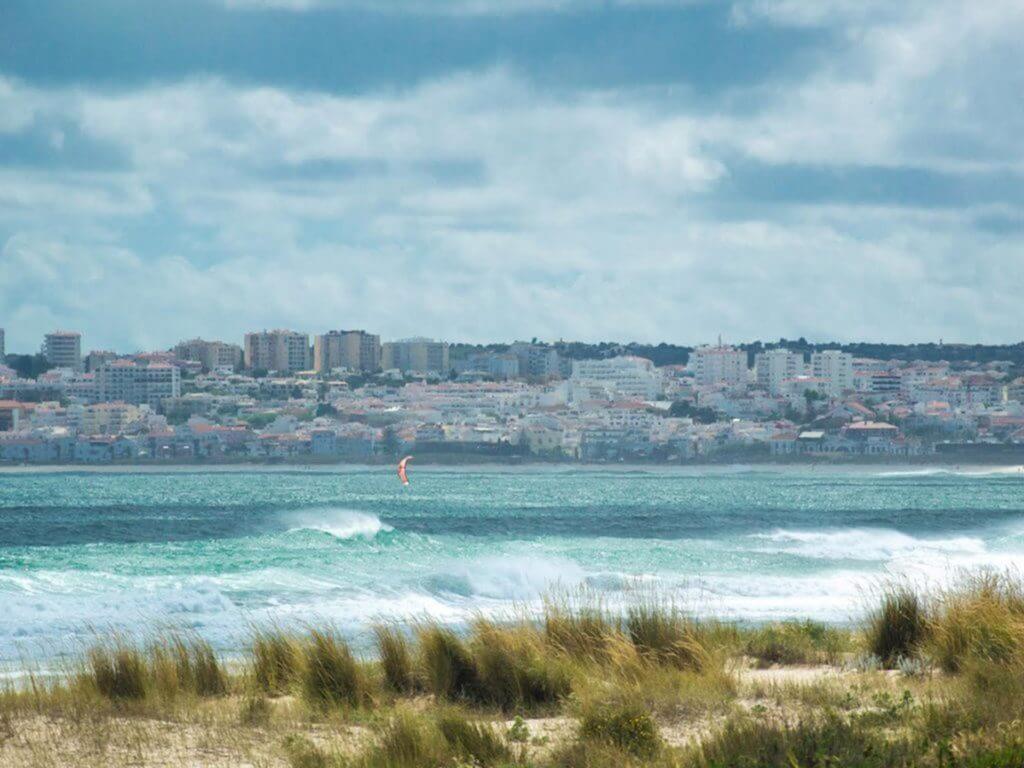 Caparica is littered with kiteable spots, but unfortunately kiteboarding is not permitted everywhere. Best stick to the designated kite beaches, the most notable of which is Novo Vaga.

Located on the southern stretch of Caparica, Novo Vaga enjoys fairly steady wind and 1-1.5 meter waves. During the winter months the swell here can get seriously heavy, but during the peak kite season in the summer the waves shrink in size and are far more manageable for us mere mortals- ideal for wave riding novices and intermediate jumpers.

Just 15 minutes south, you’ve also got access to Fonte da Telha, an increasingly popular kitesurfing beach with a handful of schools already in operation. Further south still (about a half hour’s drive away) you’ll hit the iconic Lagoa de Albufeira, which offers a mix of flat water lagoon riding and challenging breaks outside.

This is, without doubt, Northern Portugal’s best kiteboarding spot. Cabedelo is a long, sandy beach facing a big bay- there’s plenty of safe launching space and very few obstacles to worry about. There are two piers here, which create a mellow flat(ish) spot to play around in while saying sheltered from the waves.

Though if it’s waves you’re looking for, Cabedelo doesn’t disappoint. Clean breakers roll through the bay virtually all year round; if you want to experience the waves at their best, come during the full moon.

When you’re done playing around in the waves at Cabedelo, there’s a wealth of other kite beaches within a stone’s throw of Viana do Castelo; Esposende is definitely one worth checking out.

This is one of those idyllic kite destinations that offers a little bit of everything: clean waves, flat water, and above all- awesome wind. No wonder it has become known as one of North Portugal’s best kiteboarding spots! 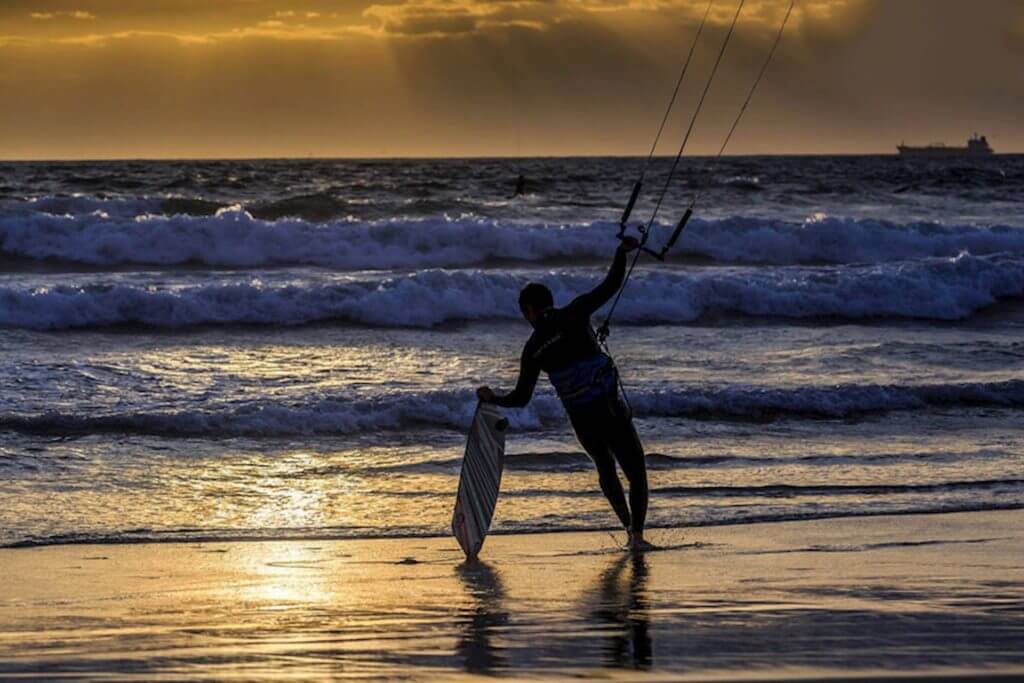 After an amazing day kiting in Esposende

Set into the iconic Algarve coastline, Lagos and the neighbouring Alvor are ideal places to stay for kitesurfers looking to score a mix of waves and flat water.

On the Lagos side of the bay, Meia Praia is the most popular kite beach. This is the spot to head for if you’re a beginner or intermediate kiter, thanks to the forgiving moderate winds and wide, spacious beach area (but keep an eye on the forecast as wind is often offshore here). On the other side, Praia de Alvor boasts similar conditions and is a safe bet for intermediate kiters ready to test out their slalom skills.

Between the two, there’s a flat water lagoon that draws all kinds of kiters- from total newbies to seasoned freestylers. The lagoon is accessible from both Lagos and Alvor, although the former requires a boat to reach it and the latter you can walk from. The lagoon is tidal, and shrinks considerably during low tide- so best head here when it’s high.

Wind tends to pick up strength as the afternoon progresses, so 9’s and 10’s usually get swapped for 7’s and 8’s. Beginners might find it more manageable during the late morning/early afternoon.

Known by locals as one of Southern Portugal’s hidden kitesurfing gems, Carrapateira sits just half an hour’s drive away from Lagos and is a fantastic option for a day trip for those kiting in the Algarve.

The likes of Bordeira offer beautiful big wave conditions that are popular with surfers, but thanks to the cross-onshore wind it’s a suitable kitesurfing spot as well. There’s also a flat water lagoon hidden behind the estuary. This spot works best in the winter; summer time winds are pretty light here.

South of the headland, you’ve got Amado, whose chaotic breaks are usually too much to kite in during the southwesterlies, but it can make for a fun little playground when the northerlies blow strong enough during the winter months.

Portugal’s southerly city, Faro, is home to a handful of kiteable beaches. The ones to take note of are Ilha da Barreta, Ilha de Culatra, Barrinha, and Ilha de Armona. Down these parts you can find a mix of flat water lagoons, waves, and moderate chop on the open ocean. By virtue of the beautiful island located just off the coast, this is an ideal place to get involved with a kite safari or a cruise on a catamaran.

When you’ve exhausted your time around these parts, head just half an hour east and you’ll hit Cabanas de Tavira, another popular Algarve kitesurfing destination thanks to its moderate winds and safe spacious beach area. 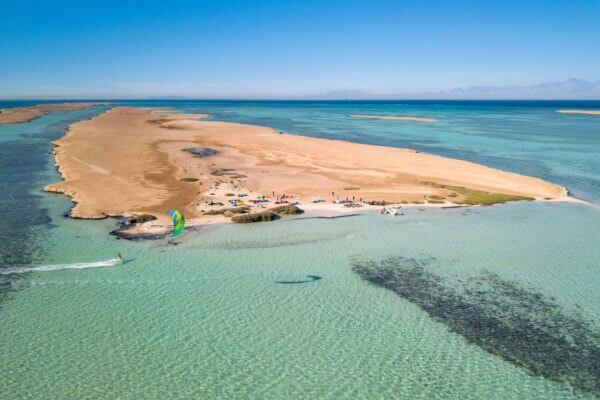 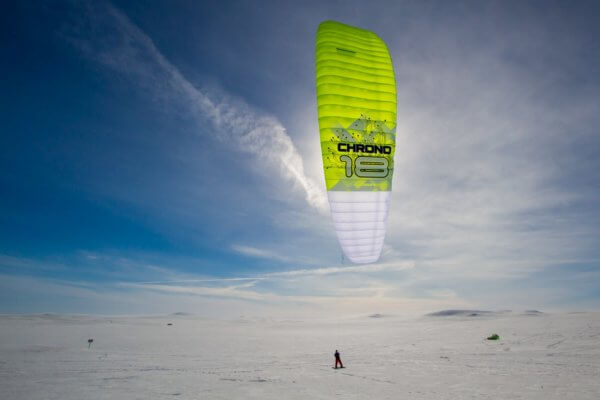