When is the Season for Kitesurfing in Tarifa? Top 3 Tips

Tarifa is pretty famous in the kitesurfing world, probably known best for its strong wind capable of sending some slightly crazy, very overpowered riders soaring over the Balneario pier. But of course, it’s not all extreme antics; Tarifa has great wind for riders of all levels.

Let’s look at how that wind changes throughout the year and when the best season for kitesurfing is in Tarifa.

Best time to kitesurf in Tarifa: Between April to October, although it’s possible to kitesurf here year round. Late spring to early autumn is ideal because the air temperature warms up then and the wind is consistent.

Wetsuit recommendation: In the summer you likely won’t need a wetsuit (you’ll probably be comfortable in rashy), but in the winter you’ll want a 3/4.

Tips for beginners: Levante wind blows stronger and gustier than the Poniente, which makes it quite a lot harder to learn in (keep reading below to find out more about the different wind types!). On top of that, the Levante wind often blows offshore, which should definitely be avoided for all beginner kitesurfers. Stick to Poniente days when the wind is between 15-25 knots cross/onshore.

>>>Check out bstoked experiences in Tarifa<<<

1. You can go kiteboarding in Tarifa year round

Because of its location at the very tail end of Spain, Tarifa sits less than 15 kilometers away from Morocco (as the crow flies). With the Strait of Gibraltar in between, a wind funnel is created between the two land masses which means Tarifa enjoys Venturi effect wind virtually all year round.

2. There are two types of wind in Tarifa (and they don’t depend on the season)

Now, just because the wind blows pretty much constantly, that doesn’t mean it blows consistently- at least, not with the same force or from the same direction.

Almost all of the wind that blows in Tarifa is either Poniente or Levante. Poniente wind blows from the sea in the west/northwest; it’s warm wind and usually measures between 15-25 knots cross/onshore (depending on the orientation of the beach you’re at). During periods of Poniente wind, the water is moderately choppy, but no big breakers for the most part.

Levante is a cold wind that comes down from the east/northeast, and since it’s a cold wind it’s much denser than the Poniente, which means it can be much more powerful. On top of its strength, Levante wind is usually quite gusty as well (not to mention the fact that it often blows offshore).

Overall, the distribution between the two is fairly even. It can be that the wind direction changes every few days, but sometimes one type will stick around as long as a few weeks.

3. Summer is the most popular season for kitesurfing in Tarifa

April through October is the best time to come for kitesurfing in Tarifa. During these months the wind is quite predictable (although anyone who’s spent considerable time there knows that the forecast can change insanely quickly, so we use the phrase “predictable” quite loosely).

On top of that, the weather in Spain is at its best during this time of year; water temperatures shoot up from 18 to 23 or 24 degrees, and air temperatures hover from mid to high 20’s. You’ll see mostly blue skies and sun and virtually no rainy days.

Late June through August is the busiest time for tourists and kiteboarders visiting Tarifa, so if you want to beat the crowds it’s best to aim to come around April/May or September/October. 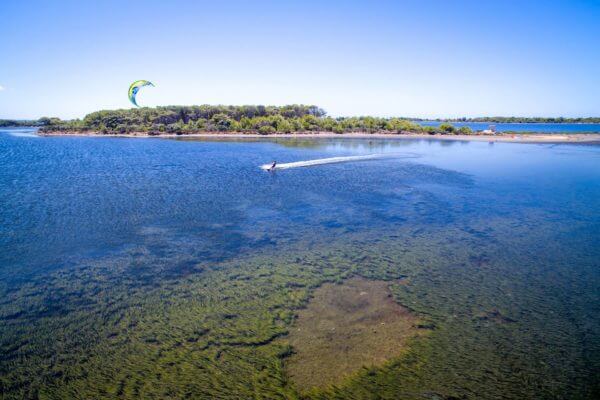