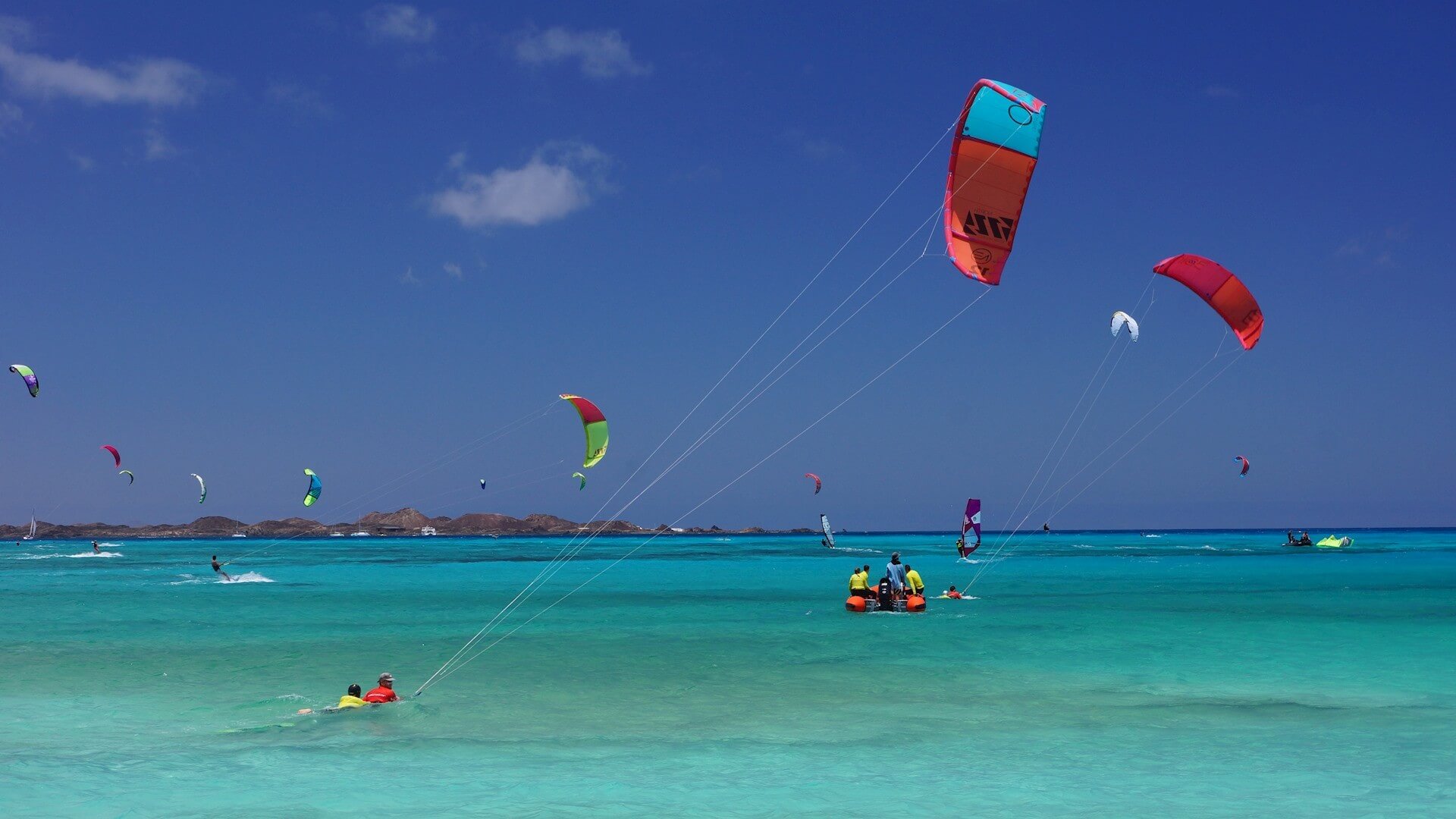 Located in Spain’s sunny Canary Islands, Fuerteventura is a primo vacation destination for anyone who values a mix of sun, sea, and socialising. Popular amongst holidaymakers as well as adventurous sports enthusiasts, the island packs a punch in terms of its outdoor adventure offerings. Hiking, windsurfing, surfing, and mountain biking are all on the menu here, but in our books it’s Fuerteventura’s kiteboarding that comes in at the top of the list.

The north of the island is home to Corralejo, a town that’s evolved to be a charming mix of old Canarian culture and modern surf style. Here’s where you’ll find some of the most popular kiteboarding spots in Fuerteventura; but that’s by no means where it ends. Thanks to its positioning right in the path of the trade winds, this little windswept island is absolutely littered with kiteable beaches.

Let’s dive into all the basic information you need to know if you’re thinking of heading to Fuerteventura to do some kitesurfing:

Average water temperature: 19 degrees Celcius, with lows of 17 in the winter and highs of 21 in the summer.

Wetsuit recommendation: In the spring and summer you won’t need a wetsuit (early in the season you may find a spring suit/shorty is good to have on hand) but in the late autumn and winter you’ll need a full 3/2 if not 3/4 wetsuit.

Tips for beginners: The safest and most comfortable learning conditions (stable wind, side-onshore orientation, no obstacles) are usually found at Flag Beach. For flat water, the best place for beginners to learn is Costa Calma. It’s possible for beginners to ride in other locations too, but try to avoid the offshore wind at Sotavento and the big waves along the northern coast.

Best spots for kitesurfing in Fuerteventura

Located in the northeast of the island just outside of Corralejo, Flag Beach is widely considered to be the main kiteboarding spot in Fuerteventura (as well as one of the more popular kite beaches in Spain as a whole). There are plenty of cool places to stay in Corralejo that are really nearby to the kite spot, and once at the kite beach there are loads of kiteboarding facilities.

The beach is spacious and sandy, and stretches down the coast for close to 7 kilometers (about half of which is marked off for kitesurfing). During the high season, wind blows 15-20 knots side shore across the beach, which means it’s a great place for beginners to learn how to ride. The only danger here is that there’s a reef underneath the water, so when the tide is low you better wear protective booties.

Not only is Flag Beach a great place to base yourself at for your kiting holiday, it also gives you easy access to the outlying island like Los Lobos and Lanzarote (you can even join a kite cruise that takes you exploring both). 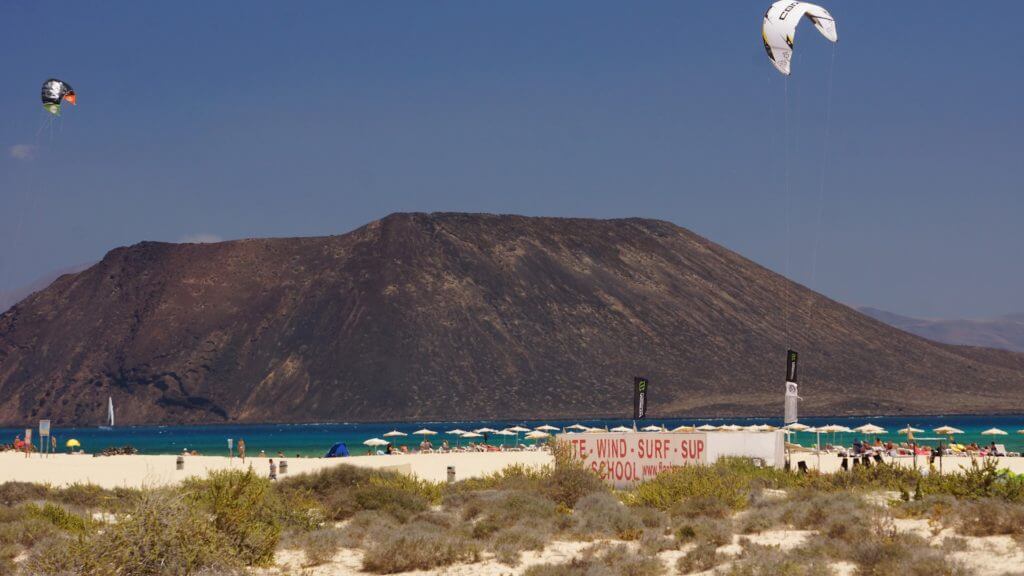 On the westerly side of Fuerteventura’s northern coast, El Cotillo is one of the more popular places on the island to catch some waves. The wind here is a little bit stronger than at Flag Beach (usually by about 3-5 knots) and can also be quite gusty. While the conditions are somewhat less forgiving on beginners, intermediate and advanced wave riders will be in their element thanks to the sweet little beach break and long, rolling waves.

When you’re ready for a change of scene, head just a few kilometers up the coast to the flat water at Faro de Tostón.

Squashed between El Cotillo and Flag Beach, Majanicho is the premiere point break on Fuerteventura with waves that measure in between 2 and 3.5 meters. Not one for the faint of heart, the beach and seabed at Majanicho is covered in volcanic rock (and the occasional sea urchin) so you’ll definitely want a pair of booties. But get yourself geared up and out there with a surfboard and you’ll quickly understand what the buzz is for this place. Inside the bay the water is mostly flat with some moderate chop during high winds, and outside the reef is where you’ll find the big rollers.

Real wave junkies will make a tour of it and stop off at the neighbouring spots (Punta Blanca, El Hierro, La Caleta, and Mejillones) along the way.

Located in the south of Fuerteventura, Sotavento receives 20-30 knots of wind that blows across the land (offshore/side-off) which means it can be quite gusty. There’s a flat water lagoon that leads out to the sea. Though there are tons of people who come to ride here and take advantage of what’s considered to be the most consistent windy spot in Fuerteventura, the offshore orientation and strong gusts mean it’s not a great place for beginners- that is, unless the lagoon is working.

The lagoon is heavily affected by the tides so it’s actually only full of water for 2 or 3 weeks of the month; make sure to check out the tides online before you set off all the way down there. But when the water level is high enough and the wind is blowing, Sotavento’s flat water lagoon can be quite a bit of fun- and a decent place for beginners to learn.

From Sotavento, drive just 5 kilometers up the road you’ll reach Costa Calma, another flat water spot which is far less affected by the tides. With 15-28 knots blowing here during the summer season and a consistent 1.5 meters of water depth, Costa Calma is a much better option for beginner kiteboarders. Just bear in mind that when the wind is blowing from the northeast it can be quite gusty (if it’s too far north the wind blows over the buildings on the beach side-offshore); it works best the more easterly the wind is.

One of the only kite spots on the east coast of Fuerteventura, Puerto Lajas is worth noting if only for its close proximity to the airport (handy if you’re dying to squeeze in one last session). Working in both northerly and southerly winds, Puerto Lajas is a good one to have in mind if your other usual spots are a bit too crowded. There’s a point break here which creates some clean little waves to play around in, too.

>>>Check out all bstoked kiteboarding experiences in Spain<<< 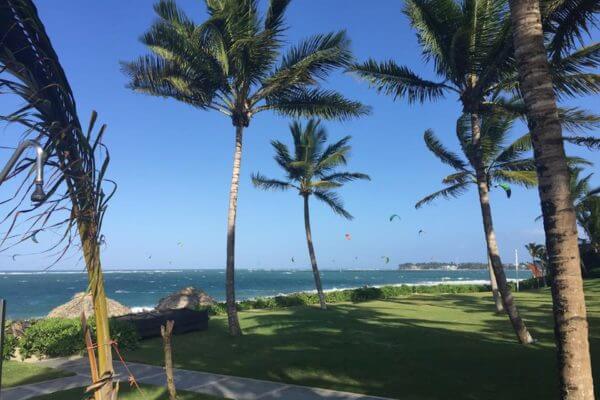 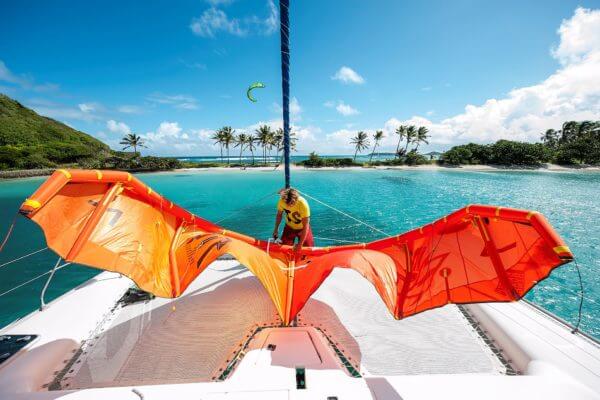